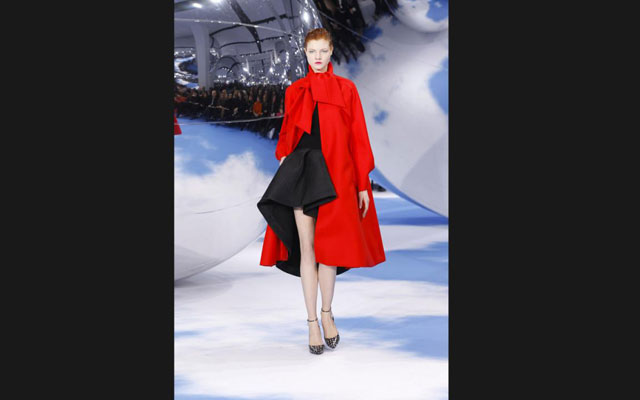 The fall-winter 2013 ready-to-wear cokkection by Raf Simons is striking in its modernity. But, look closer, and the aesthetics and the codes of Mr.Dior come into clear view.

There is, of course, the Bar silhouette, that of the “New Look”, as it was dubbed in 1947 by Carmel Snow, editor-in-chief of the American magazine Harper’s Bazaar, when Christian Dior showed his work as a couturier for the very first time. Its defined waist, rounded shoulders and exaggerated hips are instantly recognizable. This legendary line comes through in, among others, the jackets and coat dresses in the ready-to-wear collection that the designer Raf Simons showed Friday. In it he continued the reinterpretation of the Christian Dior style that he had begun last July with his first collection as house creative director. But it’s also the Dior aesthetic codes that have come to the fore and which have instigated a dialogue, across time, between the two designers.

There’s the houndstooth, so representative of Christian Dior’s anglomania, that one can pick out behind an open knit, or as a wide band at the neckline of a coatdress. The regularity of its graphic quality gives added impact to the upside-down placement on a bustier. It can also be found in its simplest incarnation, as a play of black and ivory in the cable of a long knit. Raf Simons is having fun in his mastery of the house vocabulary, speaking Dior with the ease of a native tongue. And then, of course, there’s the bow which was, to Christian Dior, ” the most natural ornamentation for a dress because it allows one to close or tie a garment in the simplest manner. I like how bows finish a décolleté, embellish a hat, fasten a belt. ” Here, it exists as wide panels at the neck of a thick coat, closing it like a knotted scarf; elsewhere, it’s a simple ribbon holding a capelet around the shoulders, nodding to the style of the spring 1947 cocktail dresses in which the ribbon made its debut in Christian Dior’s stylistic lexicon.

All these details point to the admiration that Raf Simons holds for Christian Dior, and they find their high point in the literal interpretation of certain key pieces from the house’s early years: Miss Dior, a dress from 1949, fully embroidered in pastel and floral colors, revisited all in leather in 2013; the same for the Opéra Bouffe dress of 1956; while the Arizona coat, created by Christian Dior in 1948 – and providing the textbook definition of what’s termed Dior red – reappears as it was, color intact. It took to the runway Friday, sixty-five years after its first public appearance, and in all aspects comparable to its illustrious forebearer, worn over a simple black cashmere-and-silk ensemble, and it would have taken a seasoned historian to recognize, among all of Raf Simons’ modern looks, that this one was by Christian Dior, such is the common language the two designers share.