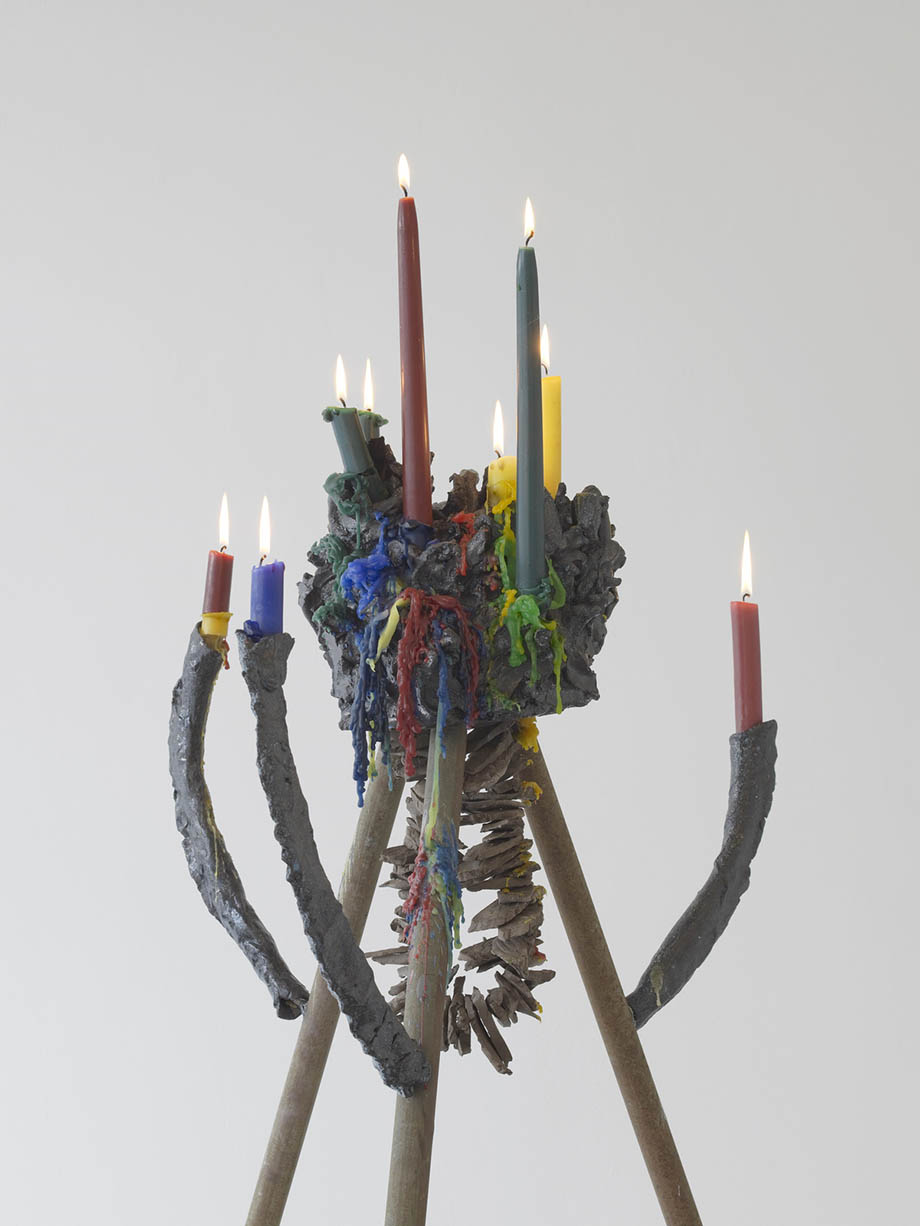 Sister1, Sister3 and Sister4 are glazed clay forms with multi-coloured candles that are lit during the works’ display, with the subsequent dripping wax forming part of the piece. They will be shown for one month, during which time different individuals and groups who represent MIMA’s constituents and communities will light the candles in a daily event. This activation of the sculptures resonates with historic and contemporary traditions of celebrating light at the darkest and coldest time of year. 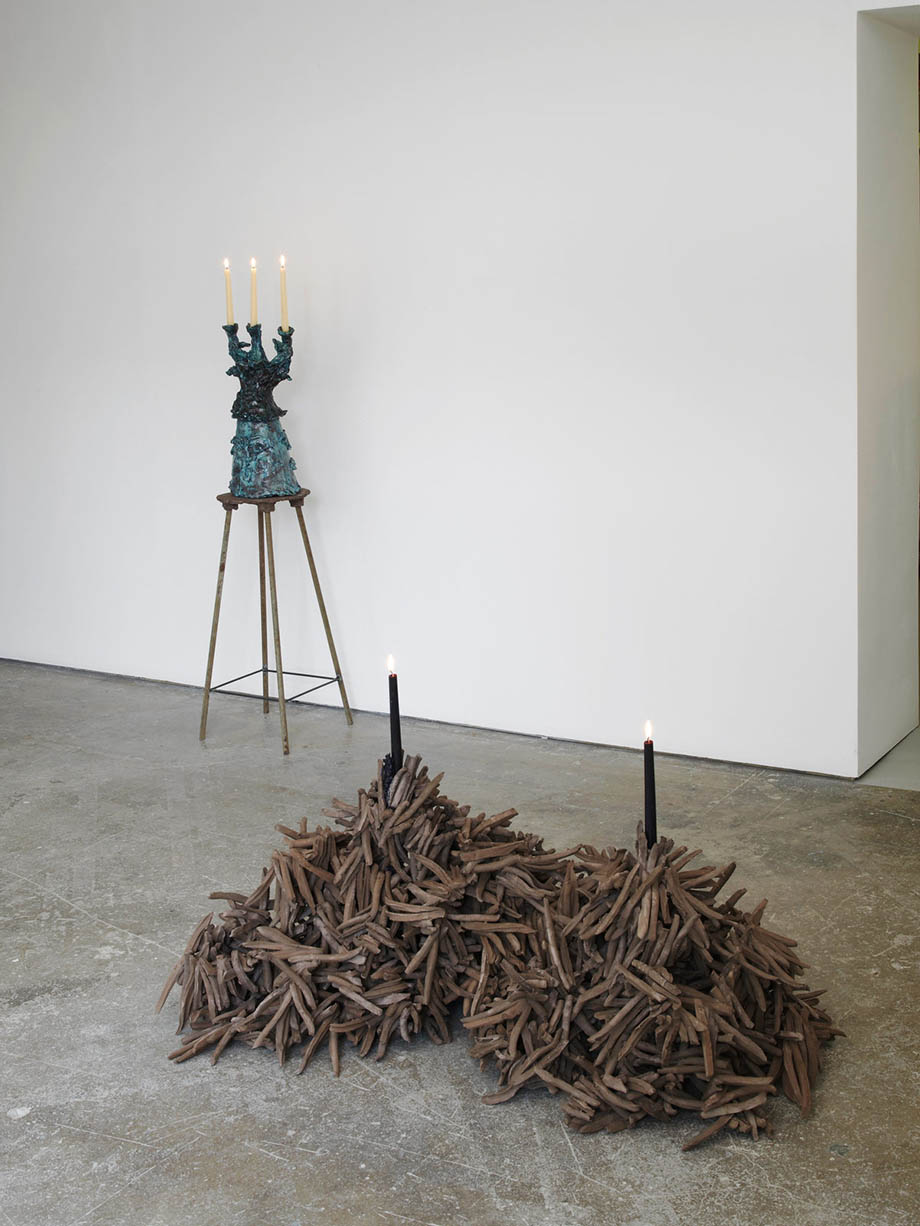 Camoni (b.1974, Piacenza, Italy) studied Sculpture at Brera Academy of Fine Arts, Milan. She lives and works in Fabiano, in Tuscany’s Versilia Hills. Camoni’s is a distinctly feminist practice. Quiet, conversational, and collaborative, it embodies important values and approaches that speak to MIMA’s recent focus on social and collaborative practices.

Camoni collaborates with those outside of the traditional frame of art through an expanded studio practice that involves working at the kitchen table, or in the garden, with people from her village. She makes through conversation and new conversations are created through the making process. Sistersare positioned simultaneously as sculptures and as events. Their forms shift whilst they are shown, marking the movement of time, through the accumulation of wax. They play with questions of function, sitting between statuettes and candelabras.

This approach resonates with the practices and processes behind many of the Middlesbrough Collection’s ceramics and jewellery holdings which come from explorations of the politics of materials, learning through making and in many cases a dynamic relationship with the maker and user or wearer of the work.

MIMA has become internationally known for its innovative approach to programming and commissioning with a civic agenda and for working with constituents – people from all walks of life – who actively shape projects with the team. This way of working democratizes the spaces of art, develops strong relationships between the Middlesbrough Collection and broad audiences and raises important questions for the sector around authorship, ownership and value.

The Contemporary Art Society champions the collecting of outstanding contemporary art and craft in the UK. Since 1910 the charity has donated thousands of works by living artists to museums, including the first works by Picasso, Matisse, Bacon, Hepworth, Caro, Antony Gormley and Damien Hirst to enter UK public collections. More recent acquisitions have included works by 2016 Turner Prize winner Helen Marten in 2012, Phyllida Barlow in the same year and in 2016 the first works by Glenn Brown and Kader Attia to enter a UK museum collection. Sitting at the heart of cultural life in the UK, the Contemporary Art Society brokers philanthropic support for the benefit of museums and their audiences across the entire country. Their work ensures that the story of art continues to be told now and for future generations. www.contemporaryartsociety.org

After graduating from the Brera Academy of Fine Arts in Milan, Chiara Camoni (b.1974, Piecenza, IT) worked at the Institute of Natural Sciences in Naples for many years. She is a founding member of the MAGra Contemporary Art Museum of Granara, IT and the Vladivostok group. She lives and works in Fabiano, in Tuscany’s Versilia Hills, IT.

ABOUT MIDDLESBROUGH INSTITUTE OF MODERN ART

Middlesbrough Institute of Modern Art (MIMA), has a civic agenda to connect art, society and our changing world. Part of Teesside University, it is a useful museum.Its programmes encompass urgent themes such as housing, migration, inequality, regeneration, and healthcare. Changing exhibitions, collection displays, learning activities, projects, and community-focused initiatives involve many artists and publics. These programmes promote creativity for everyone in ordinary life, through education, activism and making. Relationships with constituencies in Middlesbrough and beyond shape the institution as a public site, open and accessible, diverse and inclusive, and used by all. mima.art
Sally Pearson

Middlesbrough Institute of Modern Art is part of Teesside University. It plays a key role in the cultural ecology of North East England, particularly Teesside, and is internationally recognised for its mission. Its programme includes Middlesbrough Collection displays, exhibitions, learning activities, commissions, community-focused projects and events. It is funded by Arts Council England and Middlesbrough Council.