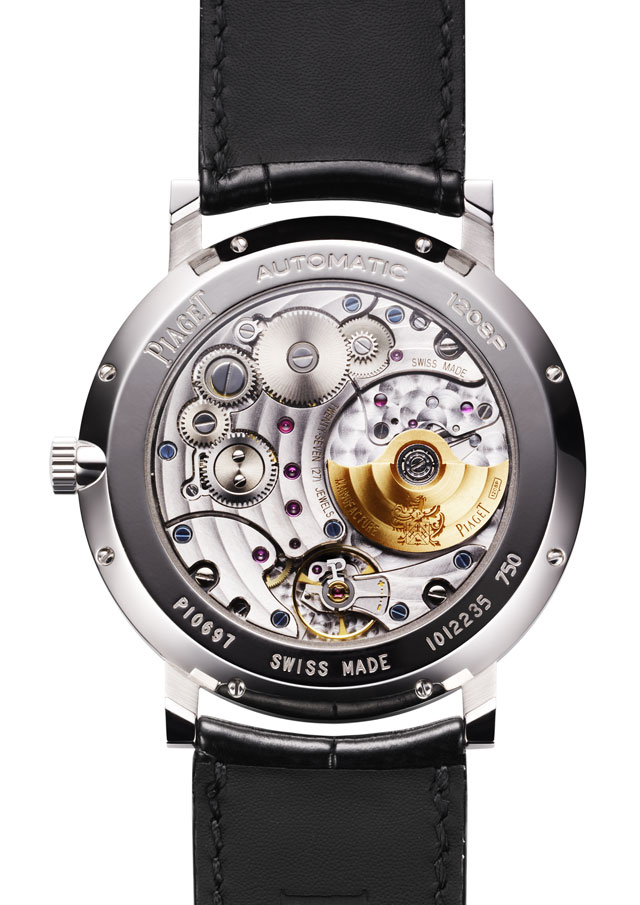 For Piaget, 2010 represents a tribute to its rich watchmaking heritage as well as a quantum leap towards the future. To celebrate the 50th anniversary of the introduction of its legendary Calibre 12P in 1960,

the world’s thinnest mechanical self-winding movement at that time, the Manufacture de Haute Horlogerie Piaget is presenting Calibre 1200P. Because it stems from the expertise in ultra-thin movements that has become a hallmark of the Piaget style, this movement once again sets new limits by becoming the thinnest self-winding movement currently on the market, at 2.35 mm: a first record.

For its debut on the watchmaking stage, Calibre 1200P is equipping as of 2010 one of Piaget’s iconic models, the Altiplano watch. Featuring a new case size (43 mm in diameter), the latest Altiplano watch is a mere 5.25 mm thick, making it the thinnest watch in its category: a second record. This exceptional piece is modest about its achievements, since amid the current frantic race toward ever more complicated models, it displays only essentials: hours and minutes. In tribute to Calibre 12P, which also featured only hour and minute functions, it will be issued in two anniversary editions: one in 18-carat pink gold and the other in 18-carat white gold, each issued in series of 235 – a symbolic number echoing the movement’s record slimness: 2.35 mm.

For over half a century, the Manufacture de Haute Horlogerie Piaget has written some of the finest pages in the history of ultra-thin movements and has played a pioneering role in doing so. In 1957, Piaget caused a sensation by developing Calibre 9P, the world’s thinnest mechanical hand-wound movement (at 2 mm thick). Two years later, Valentin Piaget filed a patent for Calibre 12P, which was marketed in 1960 and set a new record, this time in the category of self-winding watches.

Building on this historical legitimacy, the Manufacture de Haute Horlogerie Piaget has constantly cultivated and enriched its know-how in the highly technical segment of ultra-thin movements, of which the most recent are the 430P (2.1 mm thick) created in 1998 and the 830P (2.5 mm) launched in 2007. This expertise in the area of ultra-thin movements has also given rise to complicated calibres such as the 600P, the world’s thinnest shaped tourbillon movement at 3.5 mm; the 880P, equipped with a flyback chronograph and a dual time-zone function and measuring a mere 5.65 mm thick; and the 855P that manages to accommodate within just 5.6 mm a perpetual calendar, retrograde displays and a dual time-zone indication.

50 years after Calibre 12P was first commercialised, the 1200P self-winding movement not only earns the Manufacture de Haute Horlogerie Piaget a new record in the quest for the thinnest self-winding movement, but also enriches an incredibly rich portfolio of movements stemming from decades of creativity, inventions, as well as technical and human investments. This watchmaking heritage alone is sufficient to assert the brand’s stature as one of the handful of truly great Manufactures in the noblest sense of the term. 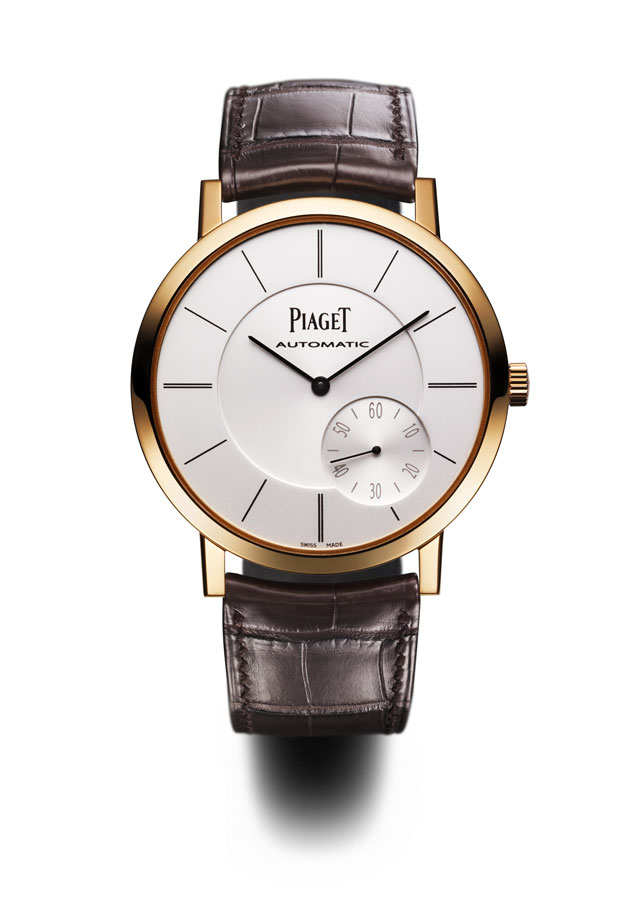 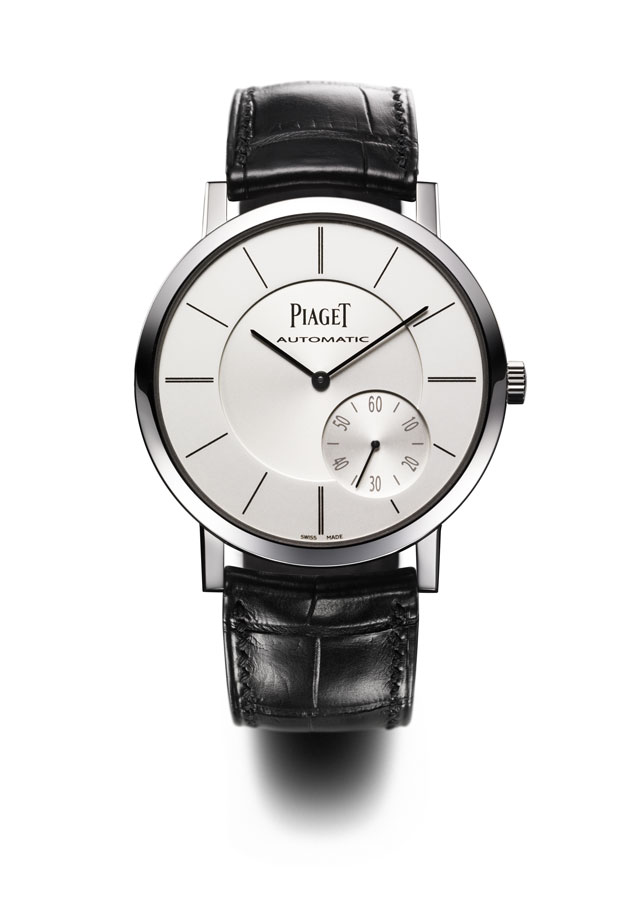 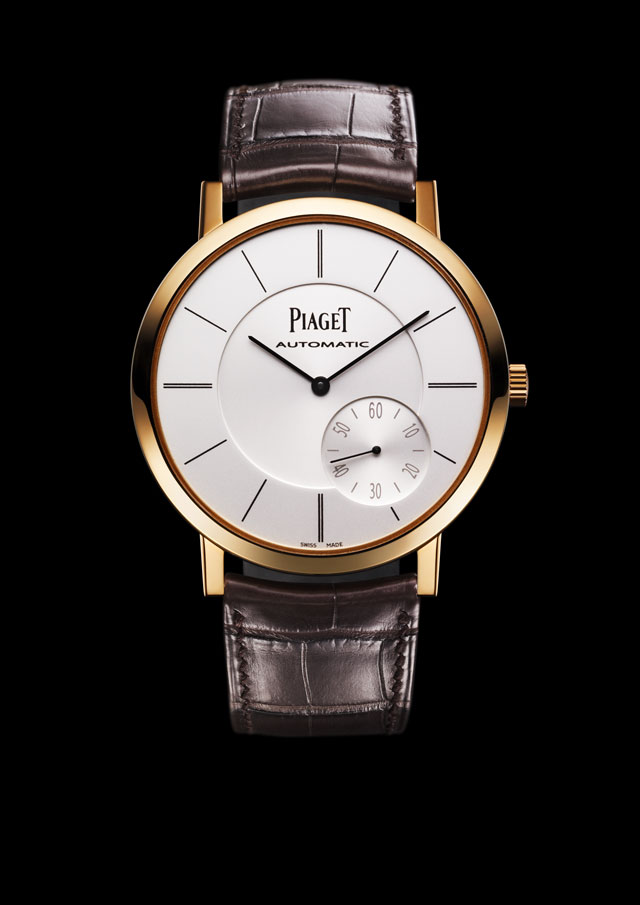 Piaget Altiplano 43 mm – Calibre 1208P
In parallel with the Altiplano 43 mm anniversary edition equipped with Calibre 1200P, the Manufacture de Haute Horlogerie Piaget presents the Altiplano 43 mm Calibre 1208P model. Designed to become part of the brand collection, whereas the model dedicated to the anniversary of Calibre 12P will remain an exclusive limited edition, this version has nonetheless been treated to the same meticulous finishing of both its movement and its exterior. Tapering lugs, a slender bezel, a pure dial, a calibre finished according to the aesthetic signature codes of the Manufacture de Haute Horlogerie Piaget: the entire range of features translates the understated elegance that is the keynote of this ultra-thin timepiece. The oscillating weight is crafted from 22-carat gold, while a small seconds display at 4 o’clock enlivens the dial and makes the record 2.35 mm slimness of Calibre 1208P even more remarkable.
With the Altiplano 43 mm watch equipped with the new Calibre 1208P – just as with the anniversary limited-edition model and its Calibre 1200P – the Manufacture de Haute Horlogerie Piaget is setting two new records: that of the thinnest mechanical self-winding movement on the market at 2.35 mm; and that of the thinnest watch in its category, measuring a mere 5.25 mm. A far cry from vintage or retro styled models, it is instead a great modern-day classic expressing a powerful new statement of Piaget’s supreme mastery in the realm of ultra-thin expertise.