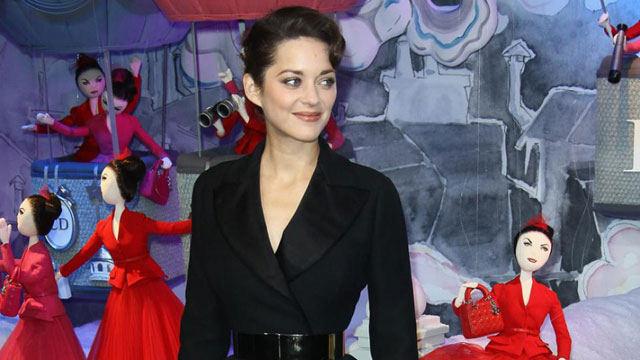 Each year, that same excitement hangs in the air. The magic builds as the streets are lit up, the first snowflakes fall, and the mood becomes merrier: for a month-and-a-half, all over Paris, one can feel Christmas slowly creeping up.

The countdown began Friday evening, and in the most poetic way possible, as, according to Paris tradition, it simply wouldn’t be the Christmas season without the lighting of the end-of-year windows of Le Printemps, the grande-dame department store. Marion Cotillard, Dior’s incomparable muse, took on the task of cutting the ribbon, and thus raising the curtains to reveal windows filled with puppets, all dressed in Dior. The scenography places Dior’s emblematic couture outfits center stage, from that first collection of 1947 with its famous Bar jacket to the most recent show by Raf Simons, the new creative director. The puppets seem to come to life as they go ice-skating, just like the Parisians who each year get together at Christmas-time on the rink set up on the square in front of the historic town hall. Then the puppets stroll along Avenue Montaigne, in front of the Dior couture house, they get into a balloon, passing before the Eiffel Tower and the Opéra Garnier, stopping before a music stand or a funfair. In this poetic universe, the Dior story is told in the windows as though it were a fairytale and, Friday evening, everyone was more than willing to dream. The numbers of both children and adult onlookers who stayed for the event swelled as, with Marion, they watched the windows light up one by one. Between the raising of two curtains, our very own Lady Dior recalled the magic of her own childhood Christmases and the stories she was told: “Not so much Christmas stories as Christmas carols, such as ‘Oh Christmas Tree’,” Marion explained. “This song has always had a special place in my heart. ‘Jingle Bells’, too. I have very strong memories associated with these melodies.”

Last Friday, Christmas officially kicked off. And even if Marion says she’s not asked Santa Claus for anything yet, she still knows how she’s going to be spending the hoilday: ‘I adore spending lots of time in the kitchen with the people I love. I love this idea of family coming together, which is something that wasn’t particularly enforced in my own family, which is why it’s all the more powerful to me now.”